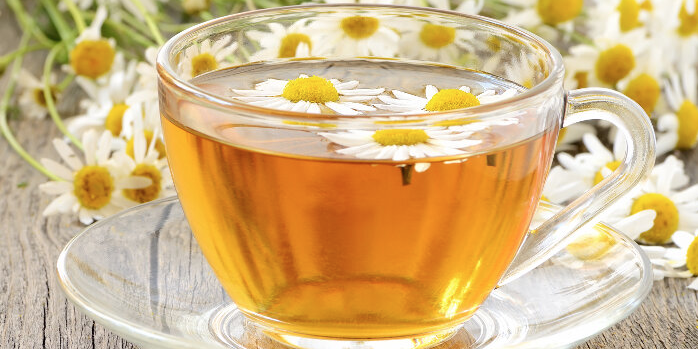 Chamomile has many uses from cosmetics to beverages and has been around for thousands of years being noted in Egyptian times.

Ancient Egyptians dedicated chamomile to their Gods because they believed it to help cure “the fever”, it was also used as the main ingredient in embalming oil for preserving deceased pharaohs. The Spanish name it “manzanilla” meaning little apple and use it as a flavoring agent in sherry making. The Romans sipped chamomile as a healing beverage and used it as incense. English brewers used chamomile flowers throughout the Middle Ages as a bittering agent in beer making. Monks during the Middle Ages cultivated the plant not only for beer but also noticed that planting chamomile near other species of ailing plants would aid in the ailing plant’s recovery. It was later discovered that the plant’s apple-like smell repels insects and other plant pests, which protects the chamomile as well as other plants close by.

The daisy-like flowering plant comes from the Asteraceae family of plants (which also includes sunflowers, Echinacea and marigold) and is most famously known as a relaxing herb.

Beatrix Potter even refers to Peter Rabbit’s mother using the herb, sending the mischievous young bunny to bed with a cup of chamomile tea when he returns home after narrowly escaping from Mr. McGregor’s garden.

The term chamomile comes from the Greek word “chamomaela” or “ground apple” to describe its refreshing, apple-like scent.