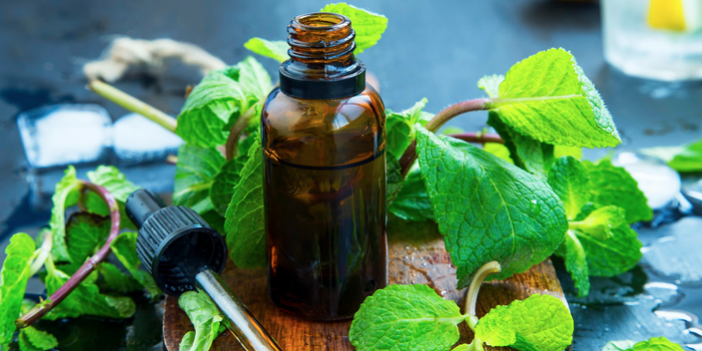 While peppermint has historically had some unusual uses, modern formulations tend to focus on its homeopathic, household and cosmetic benefits.

For thousands of years, peppermint oil has been used as a fragrance, food source and medicine. Today, it is commonly found in cosmetic, household and medical products, with its virtues extolled by producers and purveyors all over the world.

Peppermint, or Mentha piperita, was first cultivated for medical use in eighteenth-century England. However, many believe that its provenance can be traced as far back as Ancient Egyptian times. Peppermint has also been referenced in Greek mythology; the nymph ‘Mentha’ angered Persephone so much she was punished by transformation into its plant form, emitting the powerful smell any time she was touched. Beyond myth, Aristotle believed the herb to be a natural aphrodisiac, and Alexander the Great was rumoured to forbid soldiers to consume peppermint for fear that it conjured erotic and distracting feelings. Conversely, Ancient Roman naturalist, Pliny the Elder, reported its popularity simply as a pleasant food flavouring and table garnish.

Renowned English biologist, John Ray, happened upon peppermint in a garden when he spotted a sweet yet pungently aromatic plant he had not documented before. So began an era of trial and error, as biologists grabbled with the best uses for peppermint for which the herb is known today.

Peppermint is native to the Mediterranean, but has also been cultivated in the USA, Italy, Great Britain, and Japan. Global production of peppermint delivers over 4,000 tonnes per year, with the United States accounting for over 90% of its output.

To make peppermint oil, fresh parts of the flowering plant are distilled with steam which extracts the essential oils. However, this is a complex process to master, and the herb requires specific ecological conditions for optimum yield, drastically reducing the regions for cultivation.

While peppermint has historically had some unusual uses, modern formulations tend to focus on its homeopathic, household and cosmetic benefits.

This versatility is thanks in no small part to its anaesthetic, antimicrobial and anti-fungal properties, which explain why the herb is an efficacious choice for medical products and common therapeutic uses.

Certainly, one of peppermint’s more appealing therapeutic uses is in massage. With its zingy fragrance and curative properties, peppermint is an invigorating yet soothing addition to carrier oils for an uplifting massage experience. It makes sense that peppermint oil is also widely used in homeopathic remedies such as aromatherapy, with its propensity for awakening the senses and stimulating the mind.

In terms of household applications, peppermint is typically found in cleaning agents, but in Ancient Roman texts, it was believed to be a good tool for pest extermination. Some of the more typical uses of peppermint in household formulas are for disinfectants, washing-up liquids and pet care.

There’s a reason why so many bleaches have that minty-fresh scent, and many people make their own cleaning agent simply by mixing peppermint, tea tree oil and water. This solution is a great antiseptic cleanser, helping to banish grime and germs without the need for chemicals. Similarly, peppermint oil frequently appears in the ingredients of many washing-up liquids, either as a singular or complementary scent.

Peppermint is a great addition to home essentials like soaps, shampoos and candles, with a fresh, appealing scent and the practical benefits of cleaning and killing odours. It is equally effective in eliminating creepy crawlies, with another well-documented benefit being flea care.

As you might expect from the name, peppermint belongs to the mint family. It is a perennial herb, and a natural hybrid of spearmint (Mentha spicata) and water mint (Mentha aquatica). Menthol and Menthone are among the most active components of peppermint oil, and the key behind its intriguing blend of benefits. Capable of cooling, soothing and cleaning, menthol is a multifaceted ingredient that does not compromise on fragrant appeal. This is why peppermint is a fantastic option for both homeopathic and household products.