Living in a House of Cannabis – by Ziv Genesove 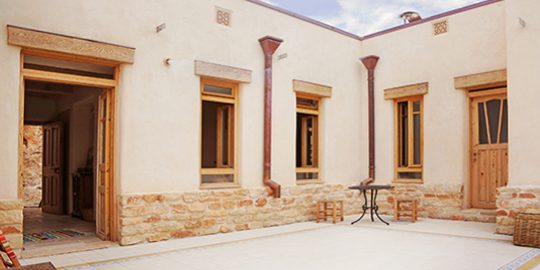 The housing issue is one of the hottest topics in Israel, since the country has become a real estate bubble in the last 20 years or so, and millions of citizens are unable to buy an apartment and are forced to rent and pay expensive rates every month.

In addition to measures such as expropriation of military areas for civilian housing, the importation of thousands of new construction workers from China and the reduction of bureaucratic procedures, various government ministries are trying to find an initiative that will reduce production costs and if possible accelerate the rate of construction – all in order to increase the supply of apartments in the country and lower housing prices.

One of the trends that have only recently entered the local construction industry is building from cannabis-hemp, which is supposed to ensure accelerated, quiet construction, with minimal ecological footprints and at a lower cost. So how does it feel to live in a home made of cannabis?

The Israeli Ministry of Agriculture established three Hemp farms in different parts of the country in intention to examine for the first time the possibility of opening an industry of cannabis-hemp that could employ hundreds or even thousands of local farms.

Besides helping with employment for the agricultural sector, many entrepreneurs and industrialists hoped that local cultivation of Cannabis-Hemp and the reform of the law would lead to the flourishing of an extensive industry of textiles, oils and toiletries, seeds, health products and more. But until the experiment is over, the conclusions can’t be drawn and the changes will continue to take place on the ground. It seems to be a long time coming.

For this reason, some entrepreneurs do not intend to wait for government decisions, and they choose to spread the “hemp word” throughout Israel – even if it means that (at least for the time being) working with hemp means to import the raw material from thousands of kilometers away.

We are on our way to visit one of the first Hemp houses built in Israel, in ‘Ein Hod’, a small place known as “the village of artists” and composed mostly of sculptors, painters, musicians, goldsmiths and various craftsmen. Eight years ago, the state evacuated all the residents from their homes in the wake of a huge fire that spread throughout the area and almost completely destroyed all the vegetation and animals, but a quick glance at the green mountains around it gives the impression that nature is recovering.

Our cannabis house is located at the edge of the village, facing a gorgeous view that on good days allows you to see the Mediterranean Sea. When I parked the car next to the house I realized immediately that I had underestimated the size of the project – I expected a nice shelter that allows for proper living, I discovered a luxurious villa.

“We thought about the idea of living in a hemp house a few years ago, in the time we lived in a Yurt,” says Daniel, an entrepreneur in her fifties who lives in the Hemp house, “We wanted to isolate the Yurt and learned about the insulation properties of Hemp. we quickly realized that here in Israel we are lagging behind on this issue compared to other countries that have been building with the material for years.”

Daniel and her partner were so enthusiastic about Hemp that they decided to fly to France, where they have been building houses with Cannabis-Hemp for decades, to meet professionals who have been involved in the field and to hear their impressions on the matter. “In France, we looked at old and new houses, and discovered houses that are getting better over the years,” she said. “The house really solidifies, and looks beautiful.”

“The climate in this house is very pleasant both in the summer and in the winter, it’s amazing,” says Daniel, “There’s no problem installing an air conditioner, but it’s just not necessary, it saves a lot of money on electricity and energy, I can tell you that I was very scared of the winter. We are talking about large spaces, three stories, 250 square meters, but everything turned out fine. ”

“Our company has been engaged for years in construction using natural raw materials,” says Yosef, a partner at “Buttz” (“Mud”), who built Daniel’s house, “Over the years we have come to know a wide variety of different materials, and learned about their advantages and disadvantages. Hemp, for example, is a breathing material, which allows regulating indoor humidity. When humidity values are ideal, between 45% -55%, then air quality also improves.

In addition to moisture regulation, Yosef also notes the minimal ecological footprint that the material leaves behind during and after construction, the high acoustic level of the Hemp, along with its health benefits: “Unlike in the conservative construction industry, which uses countless chemicals that evaporate over time in space, these are natural, clean materials that do not contain these toxins.”

Yosef takes me to the top floor, where the final stages of the attic are currently being built. “All the walls here are made of Hemp, they only need finishing of the outer layer” he explained. “The floor has been laid down this week, we will wait a few more days and cover it with a wooden floor.”

When you look at the floor you can actually see the chips of the Hemp, which made me wonder about the phrase “Hempcrete,” Yosef explained that these are the chips mixed with lime and water. The mixture is poured into the desired pattern, which hardens and solidifies after a while.

Despite all the benefits and positive attributes Hemp brings with him, his cultivation is still illegal in the State of Israel. “I think that in the end, it will happen,” says Yosef, “people are beginning to recognize the benefits of the plant – little by little, this infiltrates the public consciousness.”

By the time Israeli farmers begin to cultivate and supply him with raw materials, Yosef is buying his hemp overseas, mainly from France. He said that approval of local cultivation could certainly help reduce costs, but added that “the more local companies that would deal with the material, and more customers who demand the product, the lower the prices will get.

It is clear that Yosef believes very strongly in the work that he does and in the idea that he promotes. “In the world, they define Hemp as the future material,” he says. “I certainly hope that this is the future we expect in the field of construction because it is certainly a material with important advantages for both man and the environment, more than any other natural material I have encountered until today.”