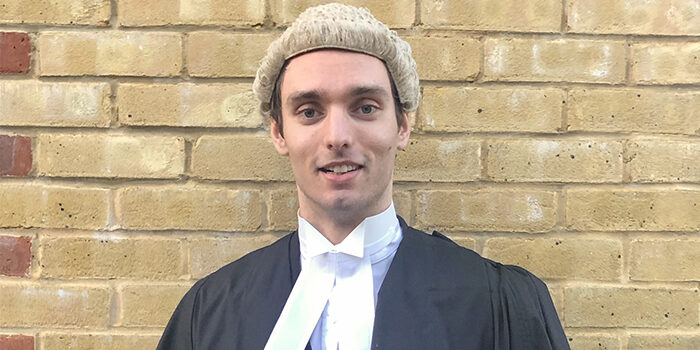 Courthouses in the UK could see an increase in vegan barrister’s wigs in the coming years as the importance of cruelty-free and sustainable products reigns.

Historically, barrister’s wigs have been made exclusively from horsehair and are part of a tradition that dates back centuries. In fact, the first judicial wigs were seen in the 17th century simply because that’s what people were also wearing outside of the courthouse!

However, in the following years, barristers continued to wear the striking white wigs, alongside complementary black gowns – even when they fell out of fashion with almost everyone else. The first horsehair wigs were produced in 1822, prior to which, it is likely human hair was used.

Now, over 300 years since their introduction to the courtroom, the barrister’s wig could be getting a vegan refresh.

A couple of days ago, Samual March, a pupil barrister took to Twitter to share images of his new prototype hemp barrister’s wig:

“The prototype has arrived. This is the world’s first hemp barrister’s wig. 0% horsehair, 100% vegan friendly. What do we think? Will it pass in court?”

Although vegan-friendly wigs are currently available, barrister’s in the UK usually have to source them from Australia. However, March’s prototype showcases the very first time a wig has been made out of hemp fibre.

March has already had interest from wig producers and judiciary retail companies following the unveiling of his prototype on Saturday (February 27).

According to the Telegraph, March believes that hemp wigs could become the norm in the courtroom. This thought is backed by interest from Ivy & Normanton, the UK’s first legal outfitter for women, as the founder told the Telegraph:

“We do not want to dilute the quality of this garb that we wear, it’s a sacred uniform and it takes a lot to get there. A hemp wig sounds like it might have a similar quality to horsehair, there’s certainly a conversation to be had.”

After turning vegan around three years ago, Mr March came up with the idea of a hemp wig last year. Since then, he has worked with hemp manufacturer Cultiva Kingdom and a “master” wig maker in England to make the idea a reality. The end product is the world’s first 100% biodegradable barrister’s wig!

How is CBD for pets different from CBD for humans?
18th May 2021
Blog search
Recent posts
Blog categories
Go to Top