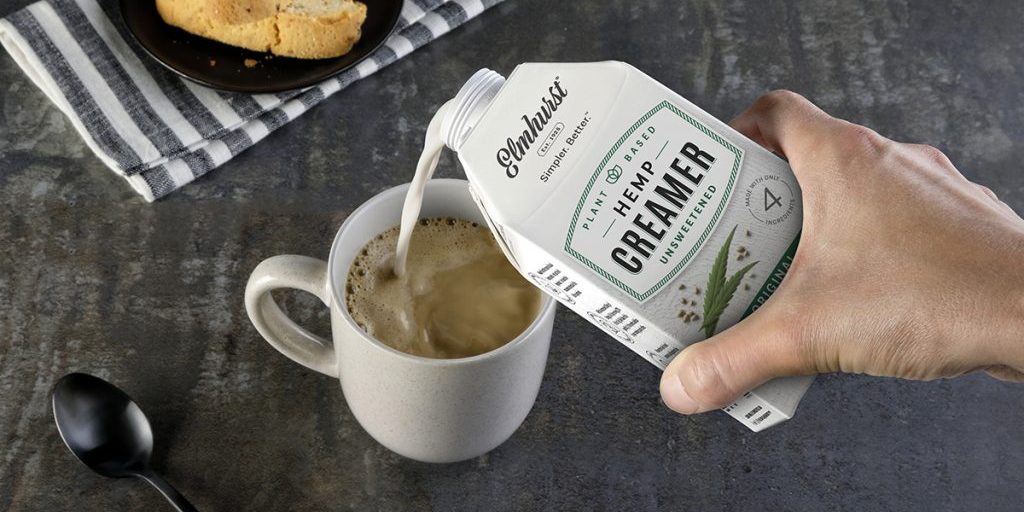 It’s Elmhurst® Unsweetened Hemp Creamer! If you thought of ten product ideas, “hemp creamer” might not have been there. But we are glad it’s here. As the first of its kind, there is literally nothing like it.

Hemp is commonly called “industrial hemp.” That doesn’t have the nicest sound, we admit, but don’t worry. It’s grown in fields, not a factory. The point is to differentiate hemp for everyday use, including food, from cannabis (which is sometimes still erroneously called hemp).

Hemp seeds can figure in to vegan, keto, and other diets as a plant-based source of healthy fats, such as Omega-3 and Omega-6.

About this Hemp Creamer…

Many people start each day with a cup of coffee. That makes it the perfect place to sneak in some extra nutrition, while getting rid of some of the extras you may find in other creamers. Here’s what you can expect from our hemp creamer:

Debuting at Natural Products Expo it picked up the award for ‘Best new vegan product” Peter Truby VP of marketing said “If CBD legality ever clears up we would add it to it,  It’s just too ambiguous; some people out there are doing it. We’re not ready to take that risk”

“Hemp milk is not particularly popular, but we predict it’s going to become more popular with the rise of CBD,” he said.

The product looks like whole milk when added to coffee, but the taste may take a little getting used to, he said.

“It can have an earthy note, a grassy note, but the cool part of hemp is it has almost nutty notes, even though it’s not a nut milk,” he said.