CANNABINOIDS – WHY ARE THERE SO MANY AND WHAT DO THEY DO? By Bethan (BEE) Rose 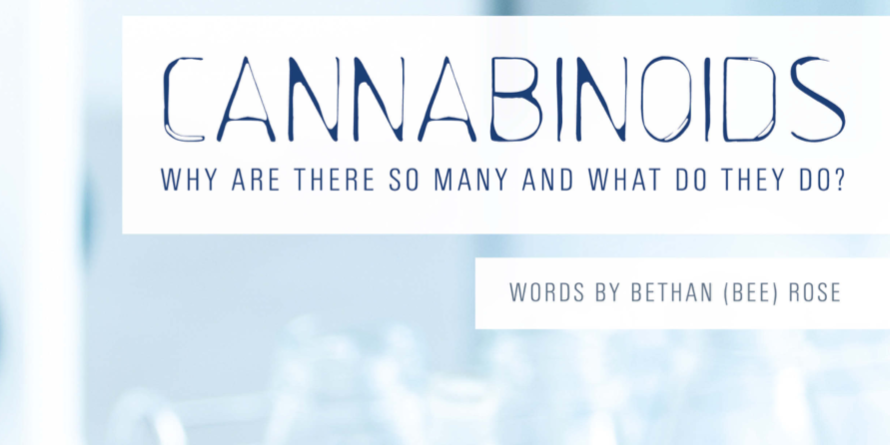 The time to expose cannabis for what it truly is – a blessing from Mother Nature – is now.

A plant that was once left in the dark and branded as ‘taboo’ is regaining a positive reputation that is enticing all kinds of people to try it; elderly individuals, adults and, in its medicinal form, even children! In fact, November 2019 saw two cannabis-derived medications – Epidiolex and Sativex from British drugs company GW Pharmaceuticals – gain approval on the NHS for young patients with epilepsy.

Increasing awareness and acceptance of cannabis consumption is contributing to a swelling consumer demographic. According to the World Health Organization (WHO), approximately 147 million people around the globe consume cannabis every year; equivalent to 2.5% of the world population.

You need not be a scientist to understand why cannabis has such a close relationship with the human body, but it wouldn’t hurt to learn a little bit of science. So, sit back and prepare
to be indulged with a healthy dose of information about cannabis’ all-important compounds, A.K.A. ‘cannabinoids’.

Cannabinoids are the naturally-occurring compounds contained in the cannabis plant. They work by interacting with receptors inside the Endocannabinoid System (ECS), of which all living mammals possess. When cannabinoids directly and indirectly target receptors in the ECS, a broad scope of effects may begin to surface.

Two primary receptors in the ECS – CB1 and CB2 – are responsible for influencing various physiological functions inside the human body, including appetite, pain response, metabolism and mood. Neurohormones can be effectively regulated by CB1 and CB2 receptors, both of which are often targeted by the primary cannabinoids.

The cannabis plant contains hundreds of cannabinoids and, so far, around 113 have been officially identified. Plant- derived cannabinoids are produced from cannabinoid acids, with the following being the most prominent:

Once heat-exposed, cannabinoid acids lose their “A” part – the acidic part. Neutral cannabinoids remain, but it should be noted that cannabinoid acids also possess therapeutic potential. Some studies have demonstrated how cannabinoid acids may have antibiotic or insecticidal properties. Since cannabis can yield plenty of goodness-enriched plant material, all the while protecting itself from harm, it’s understandable why cannabinoids in their acidic form boast protective qualities.

For now, let’s shift our attention to the most prominent cannabinoids and the properties each molecule possesses:

Considering the fact that this cannabinoid was first discovered by researchers back in the 1960’s, not many people know anything about it, or even that it exists! However, it holds significant importance. Without it, other cannabinoids wouldn’t be synthesized. This precursor cannabinoid is often referred to as the “stem cell” and research has shown that it may be useful in relieving inflammation, pain and insomnia.

Arguably the most famous cannabinoid of them all is Δ9– tetrahydrocannabinol, better known as ‘THC’. Of all the cannabinoids contained in the cannabis plant, THC tends
to be present in higher levels. In fact, some potent strains contain as much as 34% of the mind-altering substance. Examples of some effects produced by THC include relaxation, sedation, euphoria, increased appetite, improved sleep and pain relief.

Don’t expect to experience any feelings of psychoactivity when you consume this cannabinoid, which is rapidly emerging into a market of its very own. The UK CBD market sprung into action in 2016, when the cannabinoid’s medicinal properties were recognized by The Medicines and Healthcare products Regulatory Agency (MHRA).

Cannabichromene, which is abbreviated as ‘CBC’, might not be as well known as it’s relatives THC and CBD. Nonetheless, this cannabinoid has been shown to possess antimicrobial, antiviral, anti-inflammatory, analgesic, antidepressant and antiproliferative properties. Just like THC and CBD, CBC may increase the functioning of developed brain cells; a process known as neurogenesis. Since some cannabis consumers may experience unwanted side effects from THC, such as paranoia or anxiety after smoking, CBC is a welcome alternative that is devoid of any psychoactivity. A cannabinoid antagonist that can be found in small quantities in the cannabis Sativa plant species, tetrahydrocannabivarin (THCV) has been studied for it potential to suppress appetite. Conversely, THC may stimulate appetite. THCV has also demonstrated promise in regulating blood sugar levels and promoting good bone health. If you were to put THCV and THC beneath the microscope, you wouldn’t notice many differences. Aside from the fact that THCV has a longer tail/ side-chain, the molecular composition of both cannabinoids is pretty much the same.

This non-psychotropic cannabinoid has been exposed in studies for its anticonvulsant properties. Since epileptic patients require anticonvulsant treatments to reduce seizures, cannabigerivarin (CBGV) could hold potential as a type of medication for patients. CBGV may also improve the body’s ability to metabolize CBD and trigger synergistic reactions when consumed with other cannabinoids. The compound has also demonstrated anti-inflammatory and analgesic properties, meaning that it could hold promise as a treatment for fibromyalgia and arthritis.

Homologous with CBD, cannabidivarin (CBDV) is also a non-psychoactive cannabinoid. Based on previous data, shrubs of the C. indica variation have been found in large quantities in northwest India, as well as in hashish produced in Nepal. Just like CBD, the prevalence and intensity of seizures can be greatly diminished with CBDV. The compound has also been dubbed an effective method of nausea relief, a mood-enhancer and a pain-reliever.

A CBDV-based drug has been developed by a British drugs manufacturer GW Pharmaceuticals for use among patients who suffer from extreme epilepsy and/or seizures. The company is also responsible for Epidiolex, which was the first cannabis- derived medicine to ever gain approval from the Food and Drug Administration (FDA) In the United States. The UK government has also permitted Epidiolex on a prescription- only basis.

This cannabinoid was initially isolated from the cannabis plant by Thai researchers in 1975. Although it has already been more than 40 years since researchers from the University
of Nagasaki discovered cannabichromevarin (CBCV),

little research has been conducted into this cannabinoid’s therapeutic effects. Them again, it should be noted that CBCV is closely related to cannabichromene (CBC). What we know about CBC is that this compound is a powerful anandamide reuptake inhibitor, suggesting that CBCV may also possess antibiotic, antifungal, analgesic, anti-inflammatory, and antidepressant effects.

How Cannabinoid Combinations May Produce the “Entourage Effect”

The ECS was only discovered in the 1990s. Up until this time, scientists were blissfully unaware of the potential benefits
of consuming cannabinoids to regulate homeostasis. While research has been stifled due to government restrictions, the “entourage effect” has, at least, been confirmed.

Distinguishing the differences between cannabinoids is important, because if you consume more than one type of cannabinoid at the same time, the entourage effect may be triggered.

This phenomenon occurs when different cannabinoids are consumed simultaneously. The synergistic effects may begin to surface if, for example, someone consumes a whole plant/ full-spectrum extract that contains a varied ratio of CBD to THC. Since whole plant extracts are not stripped to isolate the desired compound – such as CBD – flavonoids, terpenes and other plant-derived cannabinoids will still be present
in the finished product. As a result, the entourage effect is activated.

The entourage effect isn’t limited to the cannabinoids mentioned in this article; cannabinoids are contained in all plants.
A prime example of the entourage effect being used in a sophisticated and smart way is with NHS-approved Sativex – a cannabis-derived medicine developed by GW Pharmaceuticals specifically for patients with rare types of epilepsy. Sativex contains a combination of the psychoactive cannabinoid THC and the non-psychoactive compound CBD, which many patients claim helps them to better tolerate THC’s psychotropic element.

In an attempt to trigger the entourage effect, many consumers are seeking out whole-plant or full-spectrum extracts. Using whole-plant cannabis preparations instead of isolated cannabinoids can stimulate a complex interaction between not only the cannabinoids but also, flavonoids, terpenes, fatty acids and other chemical compounds derived from the plant. Consumers can essentially benefit from the plant’s active components as they react synergistically with one another.

With this in mind, you can make a better-informed decision when trying different types of cannabinoid preparations.

Note: The information contained in this article should not be considered medical advice. Always consult with your doctor before using plant-based medicines.